The Eleusinian Mysteries conjures up mystical images of a dark and dangerous festival, befitting its name. Indeed, it was surrounded by such an aura of deadly secrecy that the Tragedian Aeschylus was nearly killed on stage just for referencing it…

But what were these infamous ‘Mysteries’ really about?

Considered the most acclaimed of all religious festivals throughout the Greek world, the Mysteries honored Demeter, goddess of the harvest and her daughter Persephone, queen of the underworld and were thought to have emerged as a masculine response to the feminine fertility festival, the Thesmophoria whose origins preceded it by some several thousand years. Thought to have been founded during the Mycenaean Period (1600-1100 BCE), the bulk of evidence for the Mysteries dates from the Archaic Period (800-480 BCE). Though unique to the Greek world, the Mysteries were primarily a civic festival that became of wide renown in ancient Greece and beyond, playing a pivotal role in the region’s concept of “cultural hegemony.” 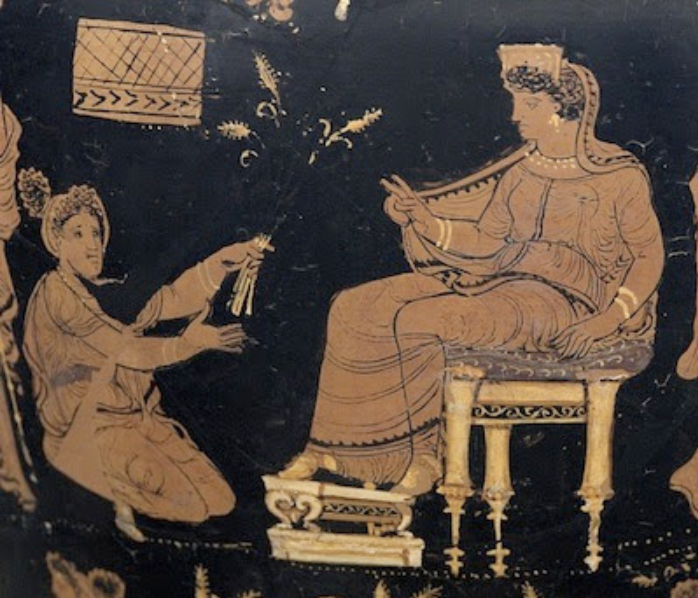 In point of fact, participants from all over the world came to Athens to participate in the nine day long rituals. In the Homeric Hymn to Demeter (hereafter referred to as Hymn), nine days of celebration corresponds to the number of days Demeter spent searching for her beloved daughter, Persephone after Hades, lord of the underworld, kidnapped her. Eleusis, an agricultural town thirteen miles northwest of Athens, figures prominently in the Hymn for which much of the cult was originally based. Because of the close proximity of two cities, Athens assumed control of the rites during the mid-sixth century BCE, when the cult became known as the Eleusinian mysteries. Unlike its feminine forebear, the Thesmophoria whose cult festivals were celebrated locally throughout the entire Greek world, the Mysteries had adherents from all over the world that came to Athens and Eleusis to celebrate; hence the two cities became central to the cult.

What was so mysterious about the Eleusinian mysteries?  The answer can be found in the word itself. In Greek an initiate is called mystes and the accompanying initiation ritual is called mysteria. Hence the Mysteries were a secret cult whose participation was restricted to its initiates wherein initiation ceremonies may have played a key role in the sacred rituals. Composed of the Lesser Mysteries and the Greater Mysteries, it is believed that initiates of the secret cult began their worship in the Lesser Mysteries only to progress into the Greater Mysteries once their initiation was complete.  Except from what we have gleaned over the ages from tendentious Christian zealots whose account is less than reliable, little is known of specific rites observed in the Mysteries.  Although shrouded in secrecy, archeological evidence has yielded artifacts from the cults including the Great Hall of the Initiation called the Telesterion at Eleusis, which was large enough to have contained thousands of initiates. 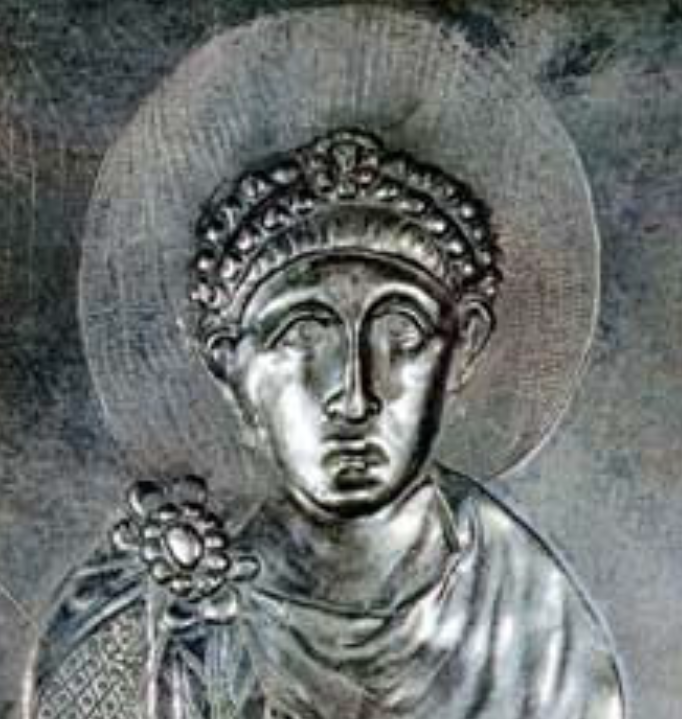 The Mysteries were celebrated in the month of Boedromion, now known as September-October, directly before the sowing season, which heralded the Thesmophoria. Memberships in the Mysteries were unrestricted, open to all women, slaves and foreigners; except for those who committed murder, everyone was welcome into the Mysteries. Although women played a role in the cult, their role was subordinate to that of the chief male hierophant (chief priest). The Mysteries, like the Thesmophoria, were associated with agriculture, but after the sixth century BCE—when Athens became involved in the rites—the focus changed from human and plant regeneration to eternal life for cult members.

While the Thesmophoria was concerned with Demeter’s imparting gifts of fertility to women and the cyclical nature of creation, the Mysteries tended to have more of masculine appeal focusing on the eschatological nature of Demeter’s story, that is to say, issues regarding life after death. Of the Mysteries, Isokrates (436-338 BCE), an Attic orator asserted: “Those who take part in them possess better hopes in regard to the end of life and in regard to the whole (aion) lifespan.” Indeed, the Mysteries’ main focus was on a happy afterlife, which initiates were promised through membership in the cult. Why was there such a divide between the two similar yet distinct fertility festivals? 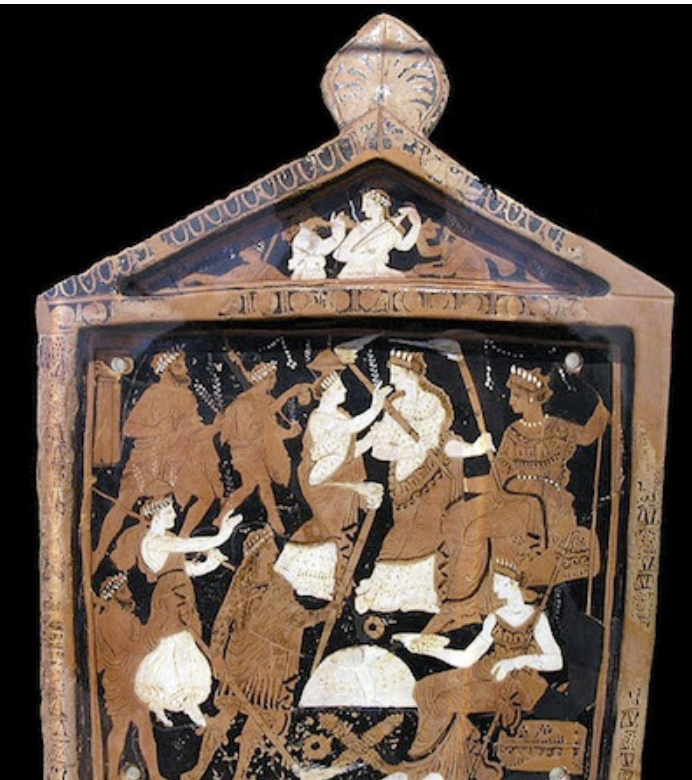 Some scholars assert that the difference in focus between the two cults could be based on gender, as women’s bodies more closely mirror the cycles of nature. They argue that women’s synchronicity to nature allows them to be more accepting of death. Rebelling against nature, men are at odds with the cyclical patterns of regeneration that the two goddesses represent. This dissonance is overcome with the assurance of an afterlife that participation in the Mysteries gave them. While the belief that a gender divide regarding death is compelling it must be remembered that the Thesmophoria is a much older festival than the Mysteries. When the Thesmophoria was founded in the Neolithic Era (6800-3300 BCE), the power of fertility was at its zenith as this was the period known for ushering in agriculture. Indeed, perhaps the contrast between the two festivals could be explained by the different eras from which they originated.

The Thesmophoria was an exclusively feminine-centric agrarian festival with a reverent acceptance that death is necessary in order to regenerate life. Moreover, it was practiced by “conservative womanhood,” meaning that through the ages its female participants observed both orthodoxy in membership, ceremony and purpose. In marked contrast, perhaps because it originated during the rise of the city-states, the Mysteries were a cult whose membership was more inclusive, continuing to evolve and alter in increasingly masculine oriented societies of ancient Greece and later Rome, evermore obsessed with the notion of a personal afterlife.

Similarly, during the course of the Archaic Era, the cultural mindset about death began a subtle but distinct transition. Earlier in the era, death was viewed with resignation, a dreaded but inevitable consequence of life. Later, death was increasingly viewed with fearful apprehension of one’s individual mortality. It is this personalized, newfound fear of death, which may have contributed to the rising popularity of the Mystery cults whose emphasis focused on a happy afterlife.

It was interesting to note that by the fifth century BCE, the Mysteries masculinized Demeter’s story by diminishing her role in disseminating agriculture to humankind, giving it instead to a minor character in the Hymn named Triptolemus. Consequently, Triptolemus played a more critical role in later versions of the myth, and became a well-known icon in Classical art, often seen accompanying the famed mother and daughter dyad.

Ultimately, the Eleusinian mysteries remained popular well into the Greco-Roman Era (332 BCE-395 CE) beginning a period of decline after 170 CE when the Samaritans sacked the Temple of Demeter. In 380 CE, Roman Emperor Theodosius I (347-395 CE) established Christianity as the state religion, ultimately closing the last Demeter sanctuaries by decree in 392 CE.